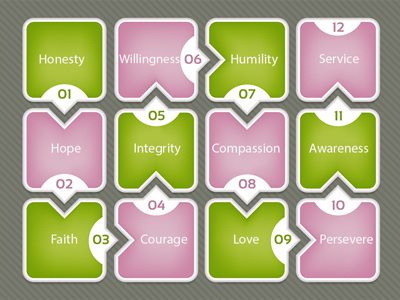 Alcoholics Anonymous (AA) was the pioneer in providing seemingly hopeless people with a design for living life sober. AA began in the 1930s and has since expanded exponentially. NA was founded in the 1950s and closely follows AA’s 12-steps, with just a few minor exceptions.

The first step in almost every program of recovery is to admit complete and utter defeat in regards to the addiction and to admit that one’s life has become unmanageable. Step two is to believe in a power greater than the self, one that can restore a person to sanity. The higher power does not have to have any religious affiliation. Step three turns one’s life over to this higher power. Step four, where the pen meets the paper, is where the person makes a list of all their wrongs. Step five is admitting these wrongs to another person and to the higher power.

Step six and step seven often get combined, but they are equally important. Step six is handing over all defects of character to the higher power. Step seven is asking the higher power to remove these defects.

During step eight, the person makes a list of everyone they have harmed. Step nine is the willingness to make amends, as long as it causes no further damage or pain. Sometimes people are not receptive to forgiveness; in that case, the best option is to allow them the time and space they need. Step ten is a daily reprieve in which the person quickly rights their wrongs and admits fault when necessary. If this is done continuously, there will be no need for a return to step four. Step eleven is remaining in constant contact with a higher power through prayer and meditation. Losing that connection can have devastating effects.

Lastly, in step twelve, the message and gift of recovery is carried to others. Few things produce more joy than seeing someone else start to understand, to see the veil of darkness and shame lifted, and the light return to their eyes. If you are concerned about these addiction recovery steps and think you can’t go through with them, just remember that millions have done it and so can you.