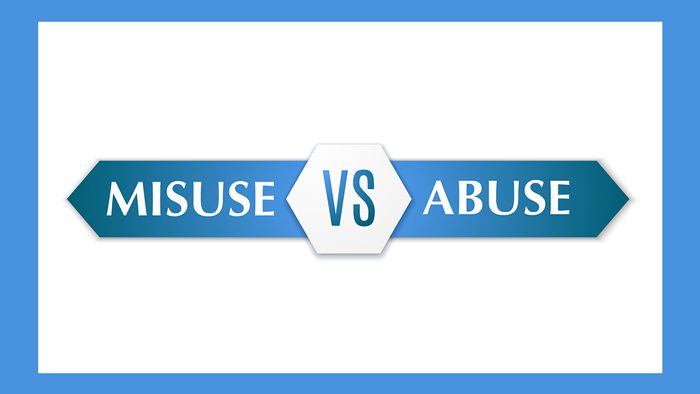 The words misuse and abuse are thought to be interchangeable; however, drug misuse and drug abuse are not the same thing.

Prescription medication is designed and intended to help with a variety of medical needs. However, misuse and abuse of prescription medication is all too common today. It is important to know the signs of both misuse and abuse in order to avoid negative consequences that ultimately follow. The misuse or abuse of a prescription drug, in short, means there is no medical oversight. In other words, the misuse and abuse of drugs such as OxyContin can lead to respiratory failure simply by taking more than prescribed. Misuse and abuse of Xanax can lead to life-threatening withdrawal seizures. ADHD medicine such as Adderall can lead to dangerously high blood pressure when not used as prescribed. Moreover, a person who takes more of a drug than prescribed may enjoy the feeling so much that they seek that feeling into the depths of full-on drug addiction.

Drug misuse is when a prescription drug is used for a purpose other than its intended purpose.

An example would be taking Percocet for a simple headache or a Xanax to treat nausea. People take the drug with the belief it will make them “feel better,” despite going against medical instruction. Also, taking more than prescribed because the proper dose “isn’t doing the job” is also a sign of drug misuse. If a person doesn’t fall asleep after taking one sleeping pill, they may take another. Prescription drugs do come with adverse side effects; however, under the care of a medical professional, the benefits outweigh the costs…when taken as prescribed. Signs of drug misuse include: taking too much, taking for reasons other than the reason they were prescribed, stopping a medication without doctor’s approval, and accepting prescription medication from a friend.

Those who abuse prescription medication are often not prescribed what they are taking. They take medication to “feel high” or to chase a euphoric feeling. Abusing powerful narcotic medications like OxyContin and Xanax leads to negative consequences such as dependency and addiction. People who abuse drugs develop a tolerance and feel they must take more and more of the drug to “feel normal.” People who abuse drugs are using them to get high–not to treat a specific ailment.

Contact us today about getting your loved one started on the road to sobriety.